Anne Georgius (*1987 in Halle/Saale) creates installations and performances using various materials and processes. Her former studies in philosophy and psychology informs her current work, which is based on theoretical examinations and metaphysical issues. Her work often refers to human perception and phenomena related to an anthropocentric view. 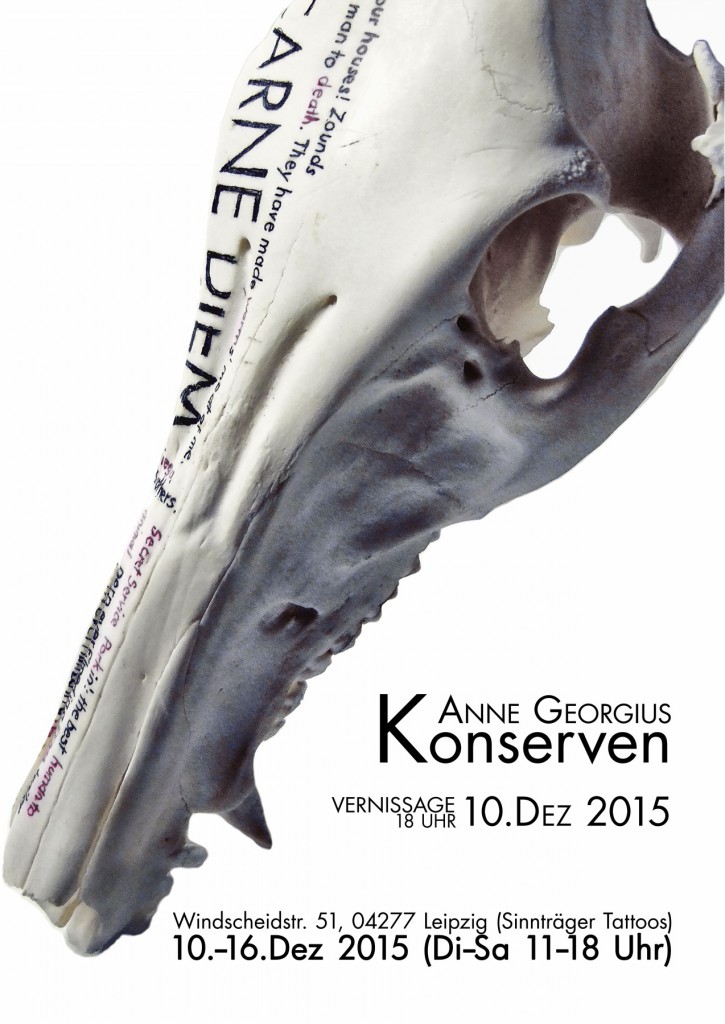 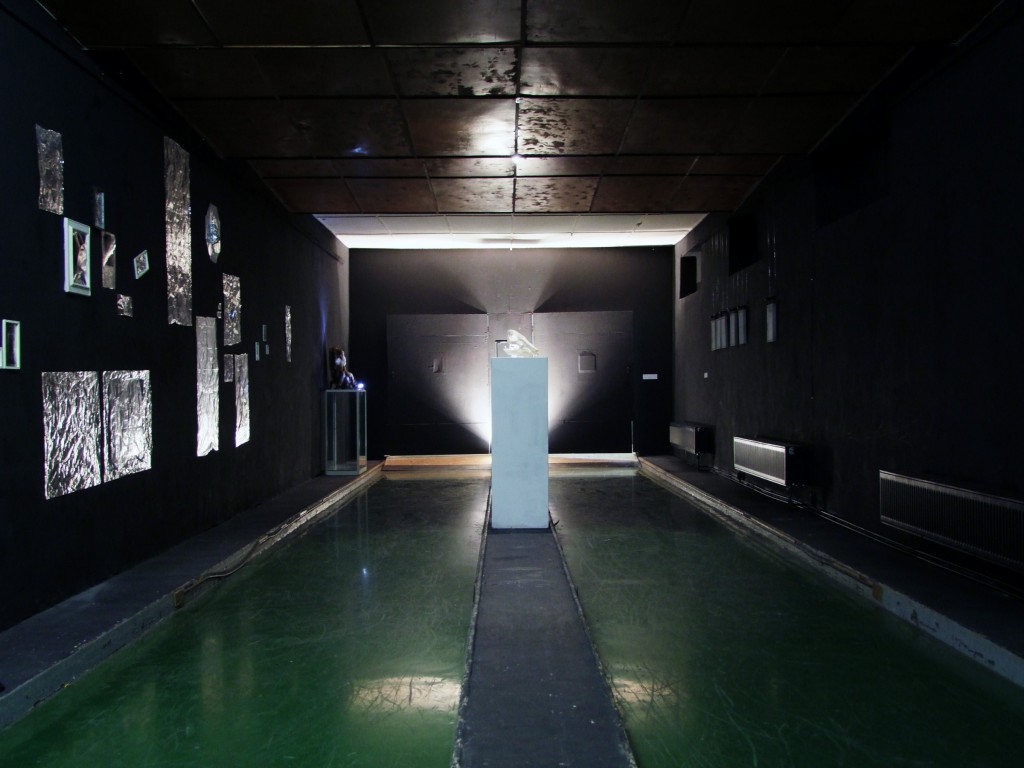 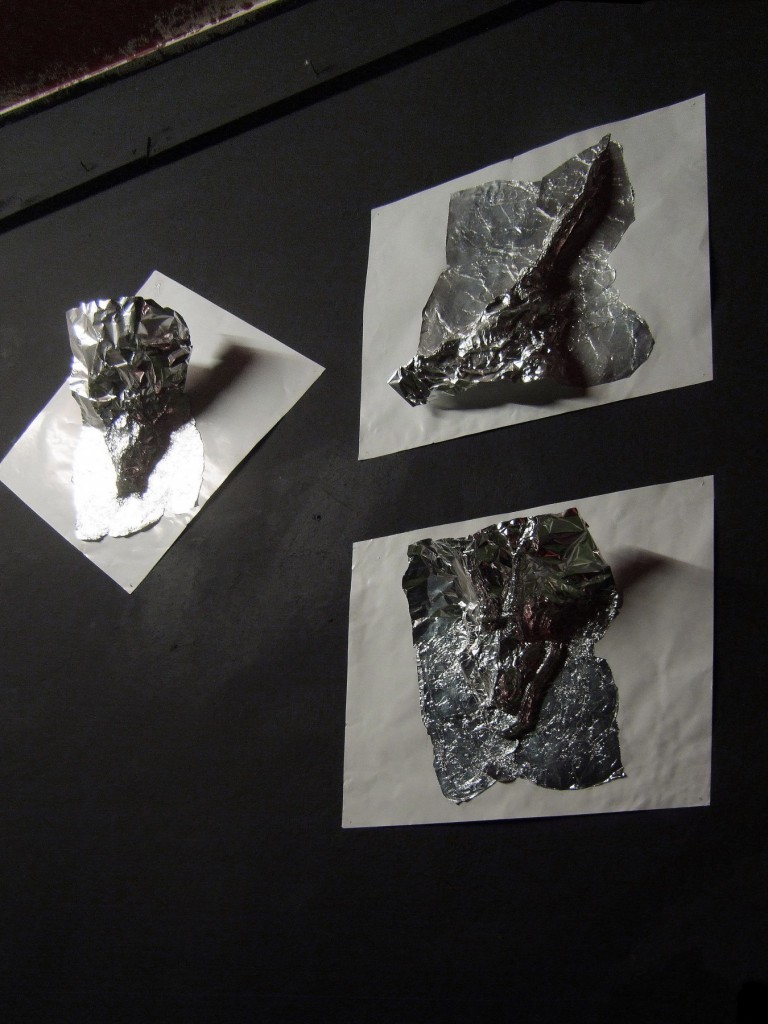 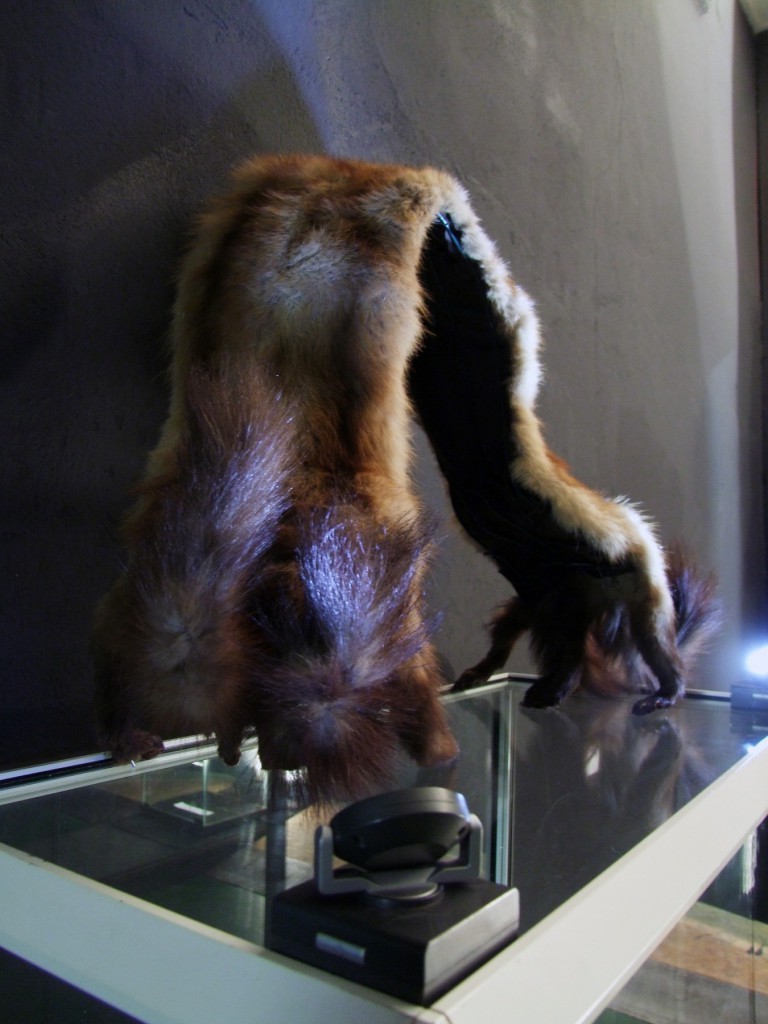 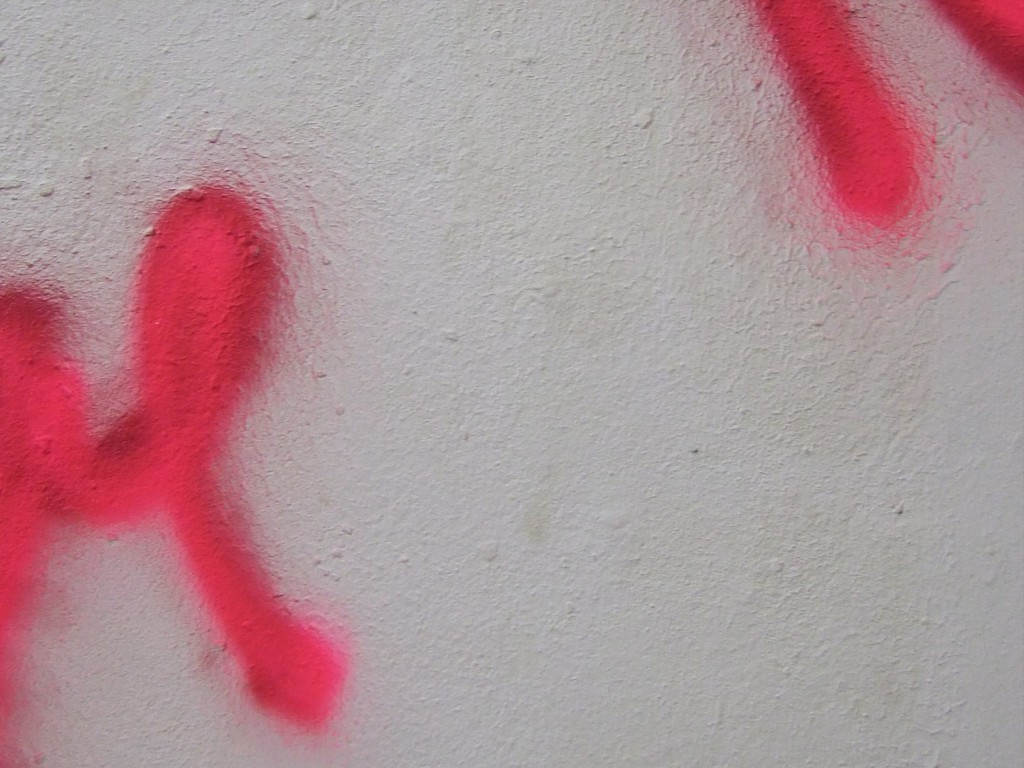 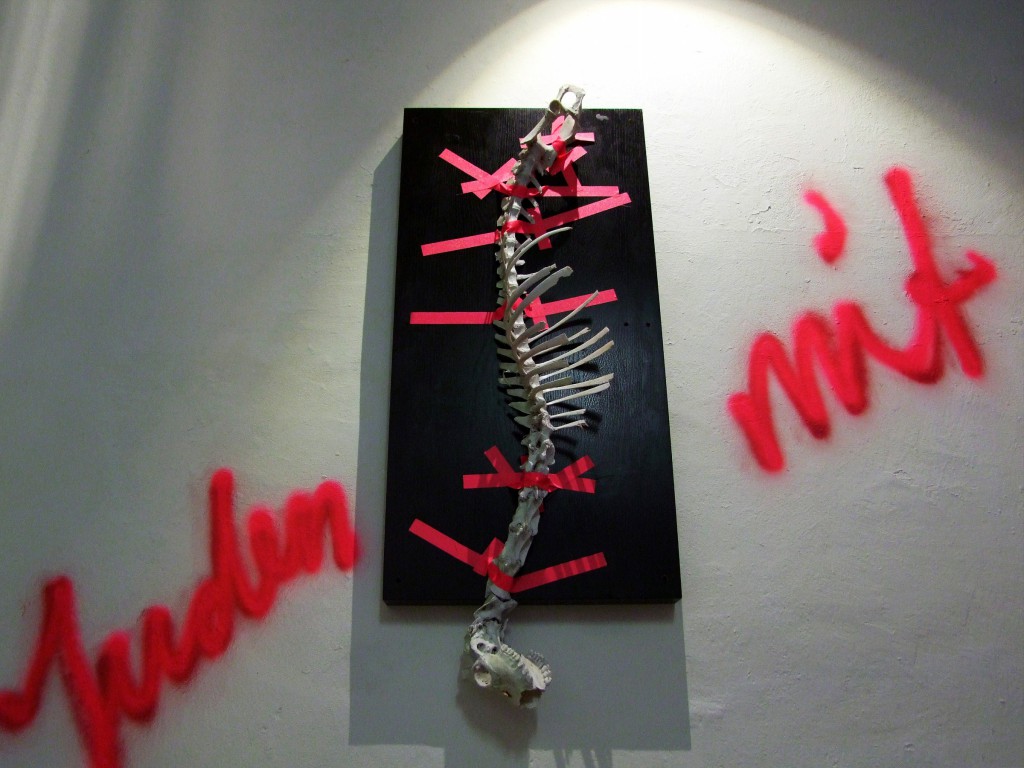 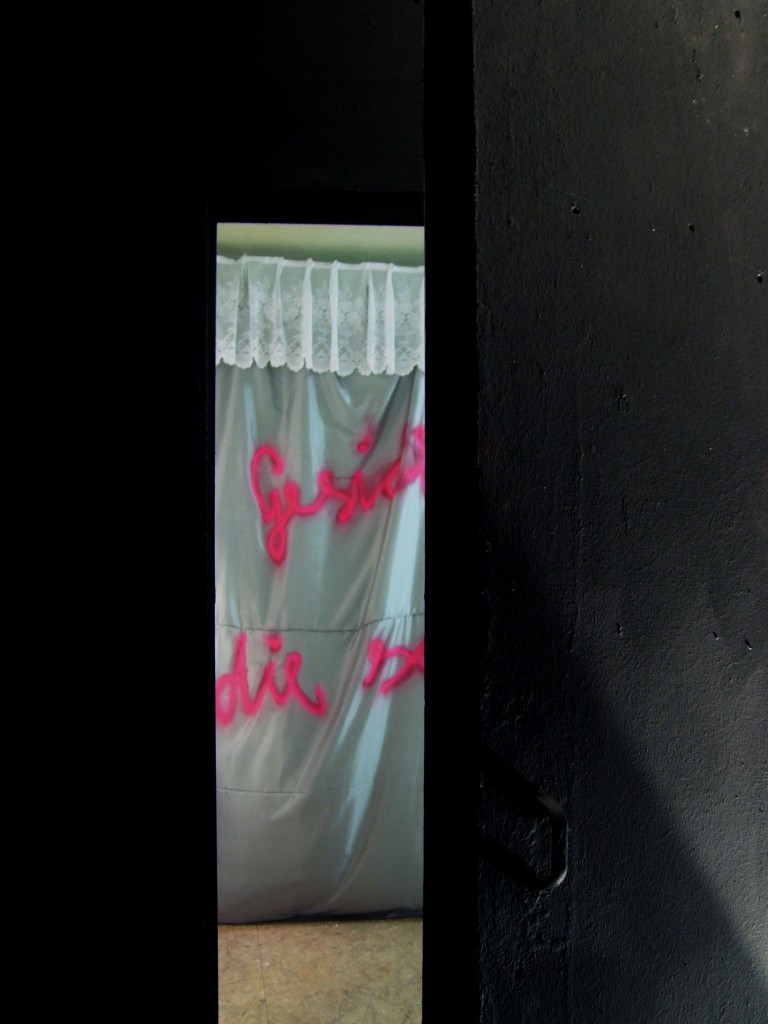 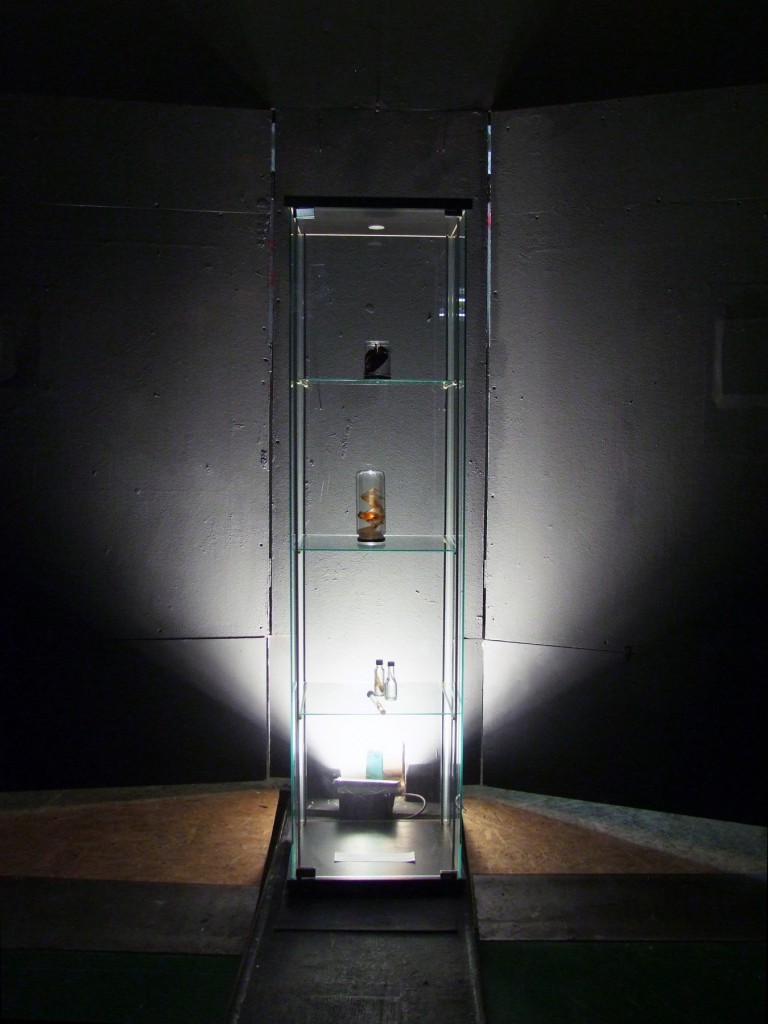 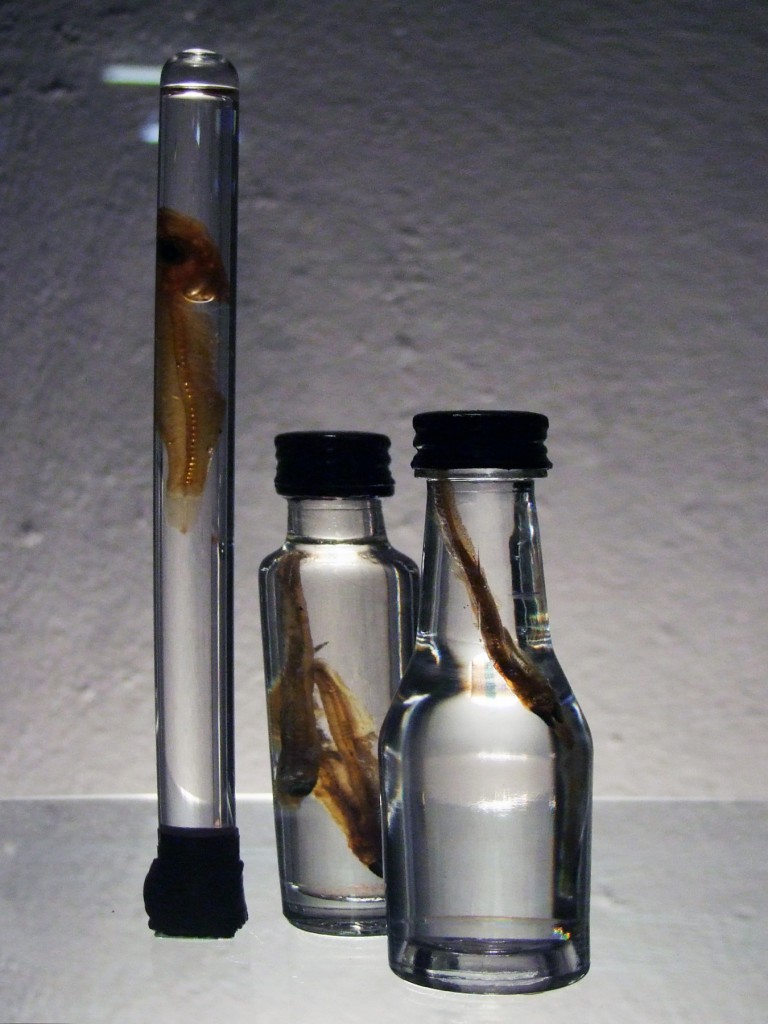 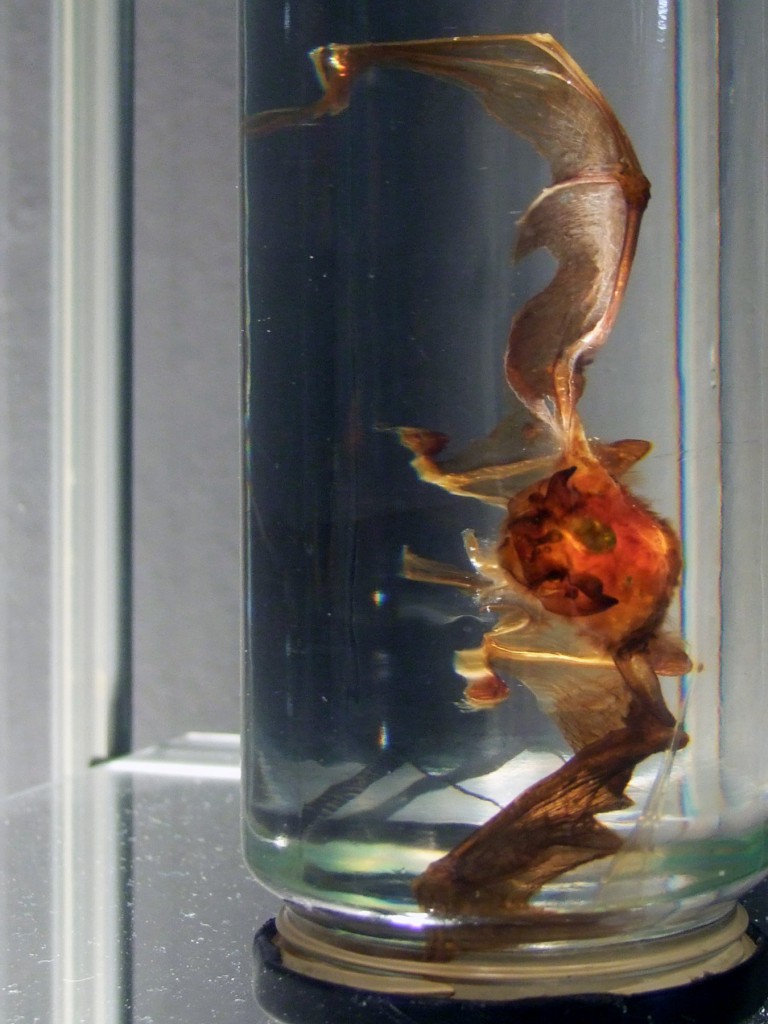 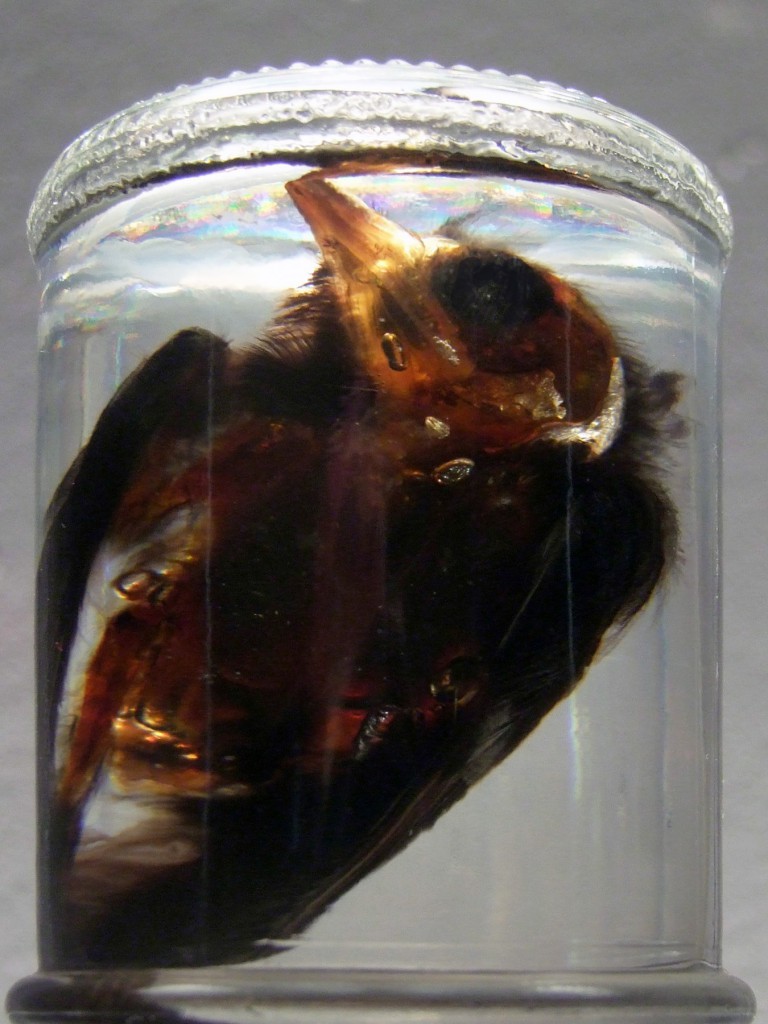 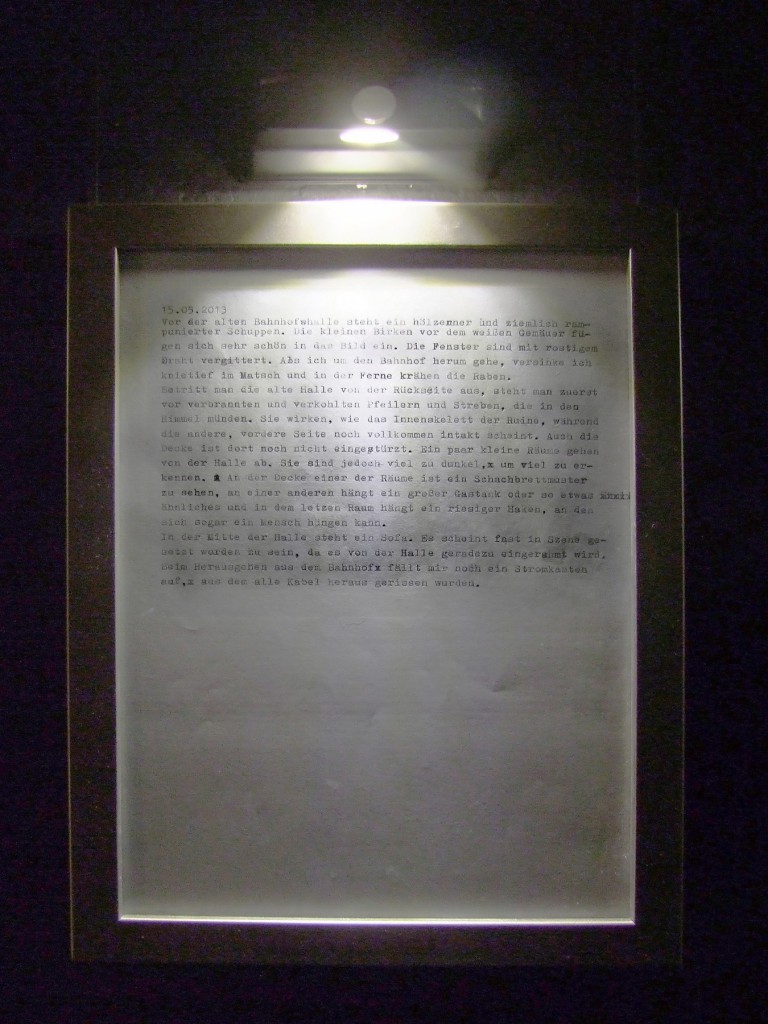 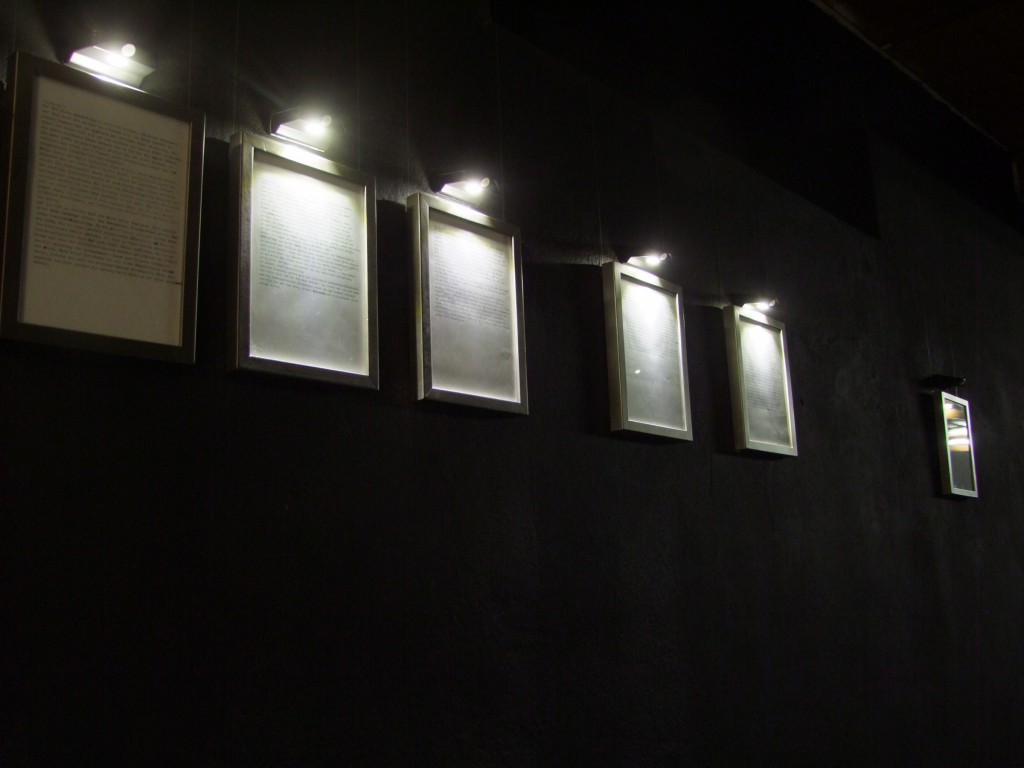 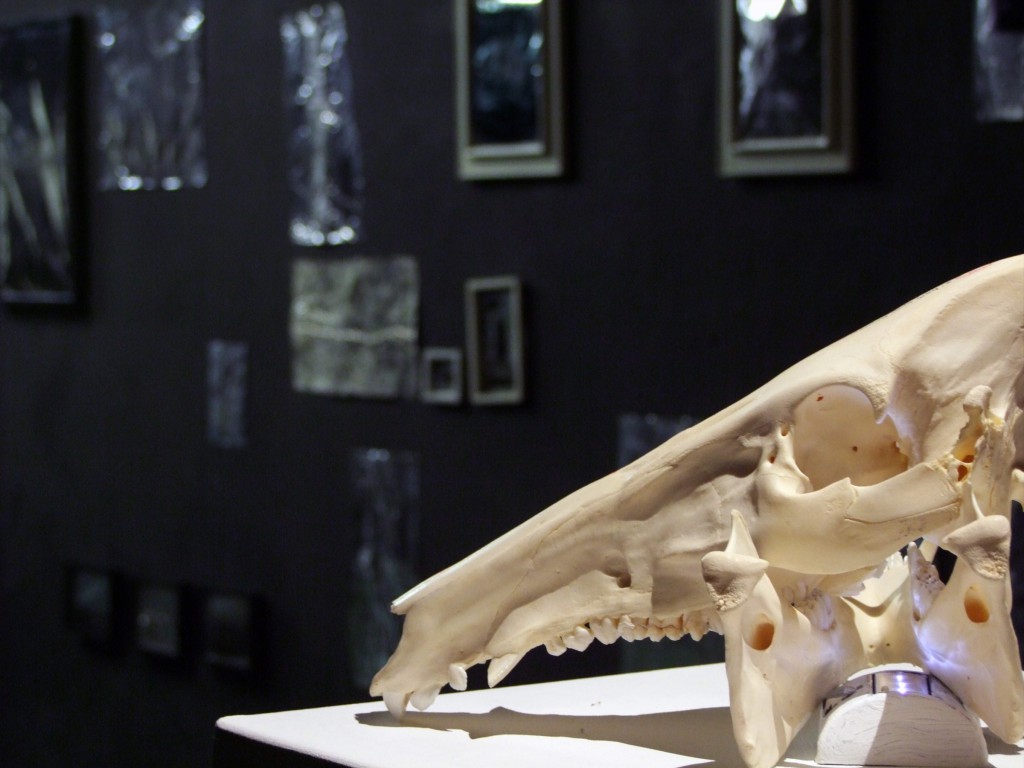 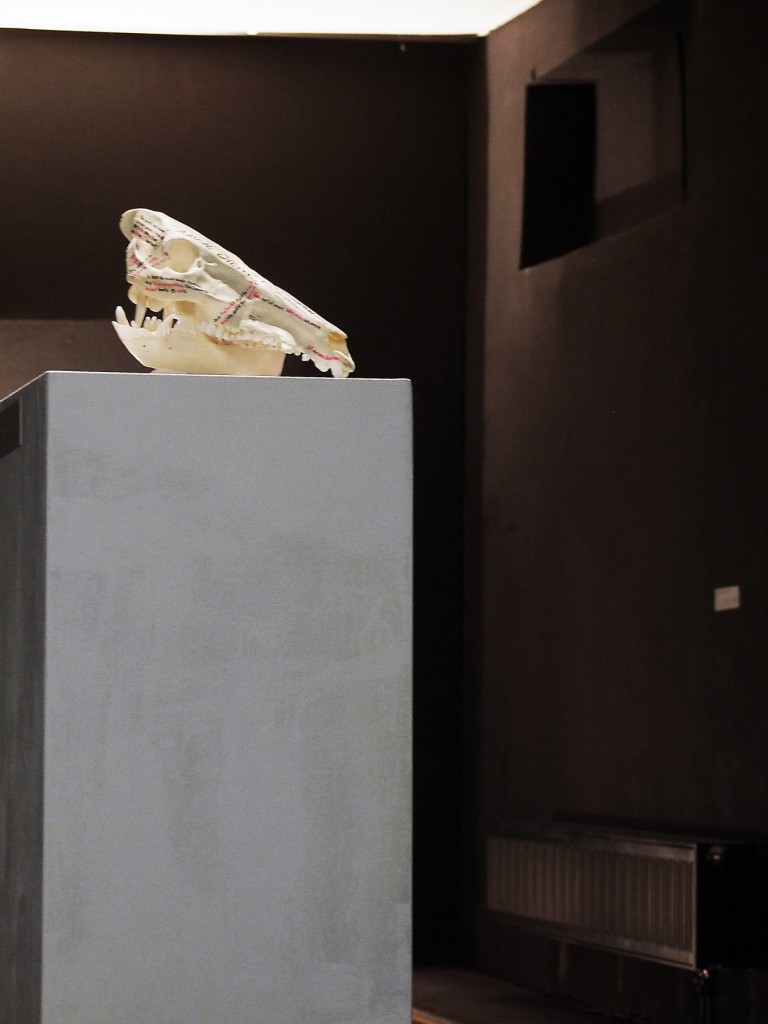 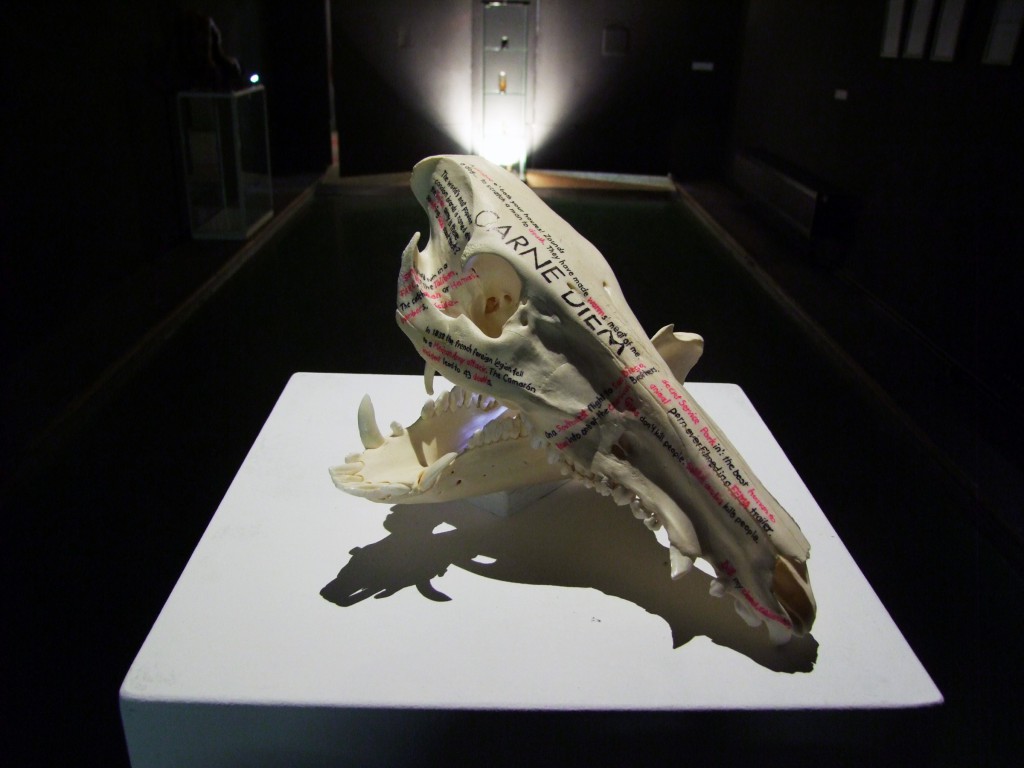 Entering the elongated, black-walled room, at first you see a white, detached column in the middle of the space. On top of it is a bleached boar skull set askew upon its jawbone. On the left side of its face many black-inked sentences are visible, written in clear, straight letters without any decor and containing brazen, pink catch phrases such as, >>SECRET SERVICE PORKin’: the best HUMAN TO ANIMAL porn ever filmed in a FEMA trailer,<< and >>On a SOUTHWEST flight to SAN DIEGO, IRAN into one of the CHEMICAL Brothers.<< A sign says that the title of this artwork is CARNE DIEM; it is made of a boar cranium and paint, 2015. It informs you about the context of all the sentences as conglomerated by the highest amount of American selector words possible in one useful sentence. It also guarantees to the person posting one of these sentences on Facebook or Twitter one additional follower from Washington.

This is just one example of my work. My artwork often contains bones, skin, and parts of an animal or whole animals. In addition to its physiognomy, being mostly reduced to a black and white or monochromatic appearance, it also contains a performative, momentary component, which gives a chance to the audience to have an influence on the final artwork. The use of phrases and language, no matter if handwritten, stamped, shot, sprayed or typewritten, is an emergent aspect in several of my works.

THEY CONSPIRE AGAINST ME!

THEY OBSERVE ME AIMING TO SUBVERT AND COLLAPSE THE WHOLE SYSTEM!<<
Theoretical examination and involvement of specific issues is the most common reason for me to make art. I am an avid reader, and inform myself about different topics frequently related to philosophy or psychology, my former field of study. From time to time, I suddenly find a correlation or connection between two different thoughts, which are not naturally related, as in the above quote. This is an exaggeration of the Copenhagen interpretation of quantum mechanics and my comment on its obvious mistake.

Overall, you can say my methods are determined by trial and error. The processes I work with are often obsolete and differ a great deal from each other, depending on the material I use at the moment. Mostly, it is an accident leading me to some interesting and cheap material; for example, when I find a junked typewriter in the middle of the street, or I receive old Polaroid film as a gift, or maybe bought a nice-looking 8mm camera at a flea market. Later, I usually recognize that nobody sells the film fitting to that camera, or the necessary camera to use this film, or the needed daisy wheels, which forces me to find a solution by myself. Replacing dysfunctional parts, one by one, allows me to create my own, optimized, technique.

If I do not stumble upon some great material, then I become fascinated by a method, physical phenomenon, proof or study I read about and which I walk-through and try out myself. The most recent example is a longer, on-going project consisting of a computer game controlled by the player’s thoughts (EEG). The interesting and exceptional point is not the brain-machine interface (called neurofeedback) but the combination of EEG and TMS (Transcranial Magnetic Stimulation), which I believe must be possible. According to a study by a Brazilian neurobiologist, you can influence a decision by briefly turning on a magnetic field on the opposite side of the brain using either your left or right hand. In combination with a mind-wave game, it gives the player the impression of control of the game, but actually the creepy game is controlling the player.

The intention of my artwork is not to evoke a very emotional response, but rather inform the audience about a chosen topic and introduce another point of view.